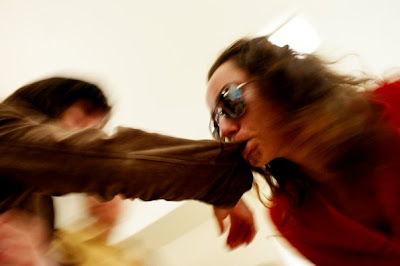 I see performance as a process that happens in the space between the author and the viewer.
The focus of my work is the influence of culture on human condition. I am trying to answer why a Human Being can be weak, clumsy, dramatic, violent, and cruel in interaction with Culture. Moreover I want to find reasons that make a Human Being reject, exclude, excrete, and vomit all that’s alien and different. I am interested in the human being’s inherent desire to fulfill His potential of perfection. I delve into the process of how He strives to acknowledge and fathom His identity; grasp the core of who He is.
I explore these issues from a personal point of view, but I don’t avoid anthropological, sociological, and intuitive approach.
My explorations concentrate on the complexity of human identity, which contains in itself a mixture of feelings, emotions, thoughts, biology of body and gender, as well as of being. The object of my interest is human nature, both physical and psychological, the human form full fragments and parts, conflicts and tension, positives and negatives, oppositions, right and left sides, vertical and horizontal, and many other shapes and directions. There is no way to assemble and unite them. There is no equivalence. Despite the awareness of some invariables existing in human nature, the question about identity still remains unanswered.
Anna Kalwajtys
Tranclation: Monika Niemczynowicz
Newer Posts Older Posts Home
Subscribe to: Posts (Atom)

Anna Kalwajtys
Gdańsk, Poland
The artist's performances focus on the nature of the creative process. In her work she not only challenges relationship between an audience and an 'object of art' but also explores relationship between an artist and their work. Anna creates situations in which an 'object' and a 'subject' confront each other and actively evokes communication between an 'observer' and a 'performer'. Her practice deals with the factor of materiality and is concerned with contextualising of the elements employed in performance art. The artist is particularly interested in the audience's change of awareness that occurs during witnessing her performances.